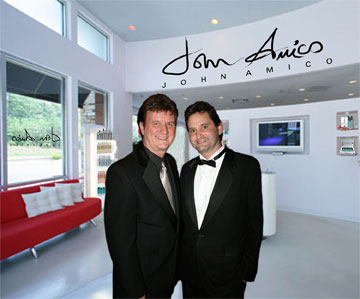 “The John Amico School of Hair Design has endeavored to produce quality cosmetologists who can meet the present and future demands of the beauty industry.

The John Amico School of Hair Design is student-focused and committed to providing each student the knowledge, training, and confidence needed to succeed in the cosmetology profession.

John Amico School of Hair Design prepares its students to pass their state licensure exam. We are “transforming lives through quality education,” thereby equipping our students, future salon professionals, with the tools needed to become successful in their communities.”

With a mother who was an artist and a father who was an architect, John Amico Sr. was destined for a creative career. After attending Notre Dame to pursue an architecture degree, he switched to beauty school. Amico’s determination to succeed came after initial failure. He was fired from his first two salon positions after only days. He started over as a shampoo boy and within six months was as good a hairstylist as anyone he worked with. After one year a client offered him a lease on an empty barbershop next to his business, and John took advantage of this opportunity. And opened his first salon. He spent the next four years training, traveling and competing as a platform hair artist. His specialty was competitive hair design and creative haircolor with European influences, after studying in London, Brighton, Paris and Amsterdam with world champion hairstylists.

When asked what led to his initial success Amico states, “Not knowing any better!” Amico was always entrepreneurial growing up, starting many small businesses. He says, “If you have a dream, you have a vision. A lot of people out there are dream-killers. You have to be able to see what others cannot see.” He initially opened a chain of his own cosmetology schools. Then, he launched “Hair Performers,” as a salon chain in 1973, seeing a need for trendier and younger image full-service hairstyling salons. He manned the businesses with students from his beauty schools and in 1976 had grown to 20 locations. He helped students and staff purchases his branded salon system of their own, telling them, “we’re going to hire you as a future owner.” This very successful salon chain grew to 225 locations.

123In 1986, Amico saw a need for a “value-priced” salon, which was a niche in the market they weren’t getting. He created We Care Hair Salons with Subway sandwich restaurant owner Fred DeLuca and they quickly opened 175 locations. Amico cites DeLuca as a role model and mentor. “We grew up in franchising together, when Subway had less than 100 locations. Amico served as a visionary leader for his own cosmetology schools and salon chains until his family decided they wanted him around more. He started selling each of the businesses in the 1990’s and focused on his John Amico Products Company, which is the oldest family, owned Professional Hair Care Company

Amico is a regular motivational speaker, at events such as Intercoiffure, Premiere, the Midwest Beauty Show and the International Beauty Shows as well as events such as the Subway International Franchise Convention. . Amico won the prestigious ‘Sprit of Life Award’ in 1986, joining the ranks of such industry leaders as Jheri Redding and Paula Kent-Meehan of Redken, Arnie Miller of Matrix, John Paul Mitchell and Mike Renzulli of Sally’s Beauty Supply. He also works to support local charities. Family remains a major part of his life and he talks to his children every day.

The John Amico Products has grown to be used in thousands of the best salons in America. John is very proud of the education that the companies teach. The is only one Cosmetology School in the US teaching the basic licensing at John Amico School of Hair Design in Oak Forest. IL His challenge in his school and salon work has not been money,

The John Amico Products has grown to be used in thousands of the best salons in America. John is very proud of the education that the companies teach. The is only one Cosmetology School in the US teaching the basic licensing at John Amico School of Hair Design in Oak Forest. IL His challenge in his school and salon work has not been money,yet rather “identifying the right people with the passion to be the best and creating the right systems for achieving their mutual success.” His biggest personal reward lies in seeing the success of those students and salon owners. “People often meet me years later to tell me how I’ve successfully impacted their lives.” Amico describes himself as a positive, nurturing influence and says the most important thing to do to succeed is to “Walk the talk. Whatever you do” you’d better lover it! if you love what you do people will help build your success.”

If you were a roommate of John Amico, Jr. during his college days, you could get a beer and a haircut for $5 on Friday afternoons in his dormitory. Amico had already decided to make a career in the hair industry at an early age, having grown up in the business with father John Amico, Sr. He worked in his father’s salons as a child, selling Christmas ornaments, sweeping up hair, stocking retail shelves and doing a variety of odd jobs. While in high school, he attended cosmetology school and he then attended Bradley College in Peoria, IL for his undergraduate degree in Marketing. Being actively involved in his father’s business at an early age gave Amico Jr. a head start. By the time he got to college, he understood how his business knowledge would apply to the industry he intended to join. He received the ‘Marketing Student of the Year Award’ while at Bradley, which came with a scholarship from Proctor & Gamble. He later earned an MBA in Finance from DePaul University.

In 1989, Amico Jr. started his full-time career in the professional salon business. He worked at his father’s new salon business “Hair Performers” for one year, taking it from zero profit to a high performing salon, reaching $11,140 in sales during their top week. Amico learned early on how to be a successful leader in his field, through the influence of his father as well as his own experiences. His father taught him perseverance, hard work and the importance of always giving something back to others. “My father is the most persevering person I know,” says Amico Jr. If there’s a brick wall and only one way over, under, or through it, he’ll do it. He’ll make the impossible — possible.” Amico Jr. then became Director of Operations for his father’s national “We Care Hair” salon chain franchise, working on store designs, training and lease negotiations. He quickly learned one of his first business lessons from Fred DeLuca, founder of Subway Sandwiches and co-owner of “We Care Hair” with John Amico, Sr.. Fred was a role model and mentor to John Jr. Amico credits other great entrepreneurs for inspiring him as well, especially early industrialists like Marshall Fields, Dale Carnegie and Henry Ford.

John Amico Jr. continued to work with his father in their cosmetology schools and salons until they were sold in the 1990’s, shifting focus to the John Amico Product Company and education. Amico focuses on ensuring that new students and salon owners are successful through the many educational opportunities. Amico says he likes to “talk about the moo,” which is being positive and motivated. He posts a motivational message on a board for his staff every night. One of his personal favorites “Life is a journey, not a destination,” stressing development and learning along the way in order to achieve any personal or business goal.

For Amico, the rewards of leading the John Amico Products Company and the John Amico School Of Hair Design have been great, including seeing it grow with new students and salons and witnessing salon professionals succeed in each of their own businesses. His wife, Julia and their three children, Jenna, John Jr. and Joey, have all been involved in various aspects of the business too, just as he was growing up. Amico says it is impossible for him to separate the individual components of his personal and family life from his business career. “It’s not like having a steak and potatoes on your plate and keeping them separate. It’s like baking a cake” all the ingredients go into the same end results. You don’t say, ‘now I’m going to work on my business, now my personal life, now my spirituality.’ All those factors create who we are.” Amico Jr. stresses that the wealth in the ‘Share the Wealth Program’ is not just about making money, but also in creating wealth in your life through personal elements such as family and spirituality.”

Amico credits other factors contributing to his success as the ability to grow and adapt to change, as well as giving back to others. He shares, “If you unselfishly give to others, it is a foundation for success!” Share the Wealth has its own charity program called “Sharing and Caring,” which gives to members who have had emergencies, from healthcare to salon damage. John Jr. recorded a CD of Christmas music to sell in order to profit this charitable cause. Along with strong values, ethics, teamwork and hard work, John credits his father as also instilling him with a love of helping others. That has been the main motivation for administrating our school and helping the thousands of salon owners and what has driven its success. Amico Jr. says his father always taught him that in the end, “people don’t care how much you know, they only care how much you care about them.”